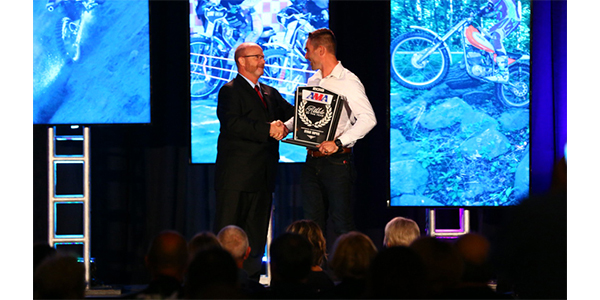 The AMA sanctions thousands of motorcycle and ATV races every year on dirt, sand, asphalt, ice and snow. The racers attending the banquet placed in the top three in their class and are among the elite amateur motorcycle racers in the country.

AMA President and CEO Rob Dingman highlighted the importance of those in attendance to the sport.

“I want to thank the riders, racers and families who give so much to the sport and activity we all love,” Dingman said. “You bring the passion, talent and dedication that make AMA racing and riding what it is today. The American Motorcyclist Association and our chartered clubs and promoters are responsible for the most expansive sanctioned motorsports activity in the world, and that would not be possible without our members.”

“We are young and old, men and women, the naturally talented and the hard-working,” he said. “It’s that love of racing that we share as AMA members. All of you, the individual riders and racers who carry that AMA card proudly–and know their AMA number by heart–are the past, present and future of this organization.”

The evening’s program was emceed by Laurette Nicoll and Kevin Kelly.

Ryan Sipes was recognized as the AMA Athlete of the Year from AMA National Championship Series competition for his ability to race competitively in several disciplines in 2018. He competed on the U.S. ISDE World Trophy team that finished in second place at the 2018 FIM International Six Days Enduro. He also competed as a member of Team Puerto Rico at the 2018 FIM Motocross of Nations, scored a top-10 finish in an AMA Grand National Cross Country Series event and won the American Flat Track Buffalo Chip TT.

“It was a busy year,” Sipes said. “I have to thank my wife for holding down the fort at home. We have three kids and that’s not easy. I had an opportunity to try something crazy and different and went for it and it went pretty good.”

The Nicky Hayden AMA Horizon Awards were presented to up-and-coming amateur racers in motocross, road racing and flat track who demonstrated the talent, dedication and poise to excel in the professional ranks.

“I just love racing motorcycles,” Daniels said. “I’ve been racing since I was four years old and my love for it has never changed. To win two Horizon Awards and national championships, this just tops it off.”

“I started riding when I was eight, just going out and camping with my family,” Martinez said. “I never would have dreamed that it got to this point. I had a long-term goal to go out and win every major off-road championship there is in the United States. It was tough, but with the help of KTM and my mom and dad it was made possible.”

“It was a tough year, for sure,” Jarvis said. “I got hurt twice this year but every time came back stronger. I had a great year this year and I can’t wait to see what 2019 brings.”

For the second consecutive year, Destry Abbott was named AMA Vet Racer of the Year. He won the Vet Class Championship in the 2018 AMA Endurocross Championship Series and competed on the E4, Elizabeth Scott U.S. ISDE Club team at the 2018 FIM International Six Days Enduro while recovering from cancer treatment. Abbott was unable to attend the event.

The 2018 AMA Youth Racer of the Year was Caden Braswell. He won the 85cc Class title at the FIM Junior Motocross World Championship, as well as the Mini Senior 2 (12-14) Class titles at the 2018 Rocky Mountain ATV/MC AMA Amateur National Motocross Championship. He finished third in Mini Senior 1 (12-13).

In addition to the competition awards, for many years the AMA has recognized the AMA Sportsman of the Year. AMA Sportsmen of the Year may be ambassadors, competitors, promoters or others who go above and beyond to elevate the sport or demonstrate exceptional fairness or selflessness in AMA-sanctioned activity.

The 2018 AMA Sportsman of the Year was Kenneth Held. He is a hard-working volunteer who helped organize many AMA-sanctioned hare scramble events in the eastern United States, and also worked with up-and-coming off-road riders through his youth travel team program.

Other award winners announced at the banquet were:
AMA Motocross Organizer of the Year
Lincoln Trail Motorsports

AMA Track Racing Organizer of the Year
Flat Out Friday