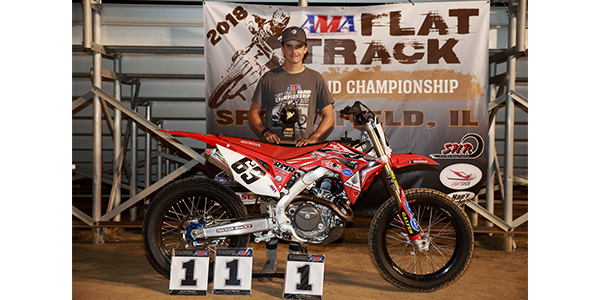 These outstanding AMA competitors were selected from among the riders who participated in the 2018 AMA Flat Track Grand Championship at the Illinois State Fairgrounds in Springfield, IL, on May 29 through June 1.

“The AMA is proud to present these young men with our two most prestigious awards for amateur flat track racing,” said AMA Track Racing Manager Ken Saillant. “Both Dallas and Kody are fast riders and great competitors, who have earned their place within the ranks of the AMA awards’ previous winners.”

The Nicky Hayden AMA Flat Track Horizon Award honors the amateur racer who is poised for success at the professional level. The award was renamed in 2017 in honor of the late Nicky Hayden, who was the inaugural winner of the award in 1997. Previous winners have also included Brad Baker, Jared Mees, Bryan Smith and Roger Lee Hayden.

Daniels was one of the top performers at the 2018 AMA Flat Track Grand Championship, riding his Honda to three class championships. He was the 2014 AMA Youth Dirt Track Racer of the Year Award winner and also competes in professional road racing in the MotoAmerica Junior Cup. 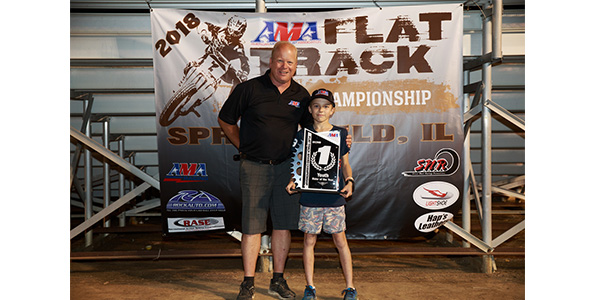 Joe Kopp, his father, who won the AMA Pro Grand National Championship in 2000, was delighted.

The AMA Fast Brain Award includes a $1,500 educational scholarship that benefits one young racer whose talent with the throttle is matched by his or her aptitude in the classroom. The AMA thanks AMA Motorcycle Hall of Famer Bill Werner, Zanotti Racing’s Dave Zanotti and Bromley Motorsports for funding the award for 2018.

Both winners will be honored as part of the AMA’s Legends & Champions Weekend, which is scheduled to take place in Columbus, OH, on Dec. 7-9.