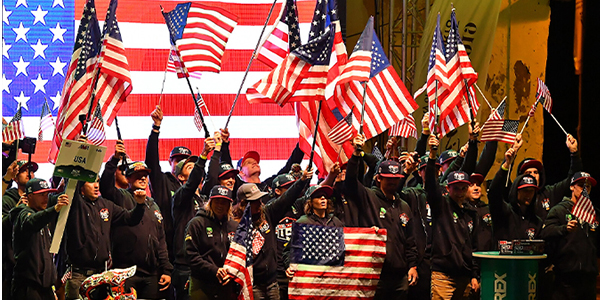 “I’m excited to return to ISDE racing after a long, one-year break from it,” said U.S. ISDE Trophy Team Manager and FMF KTM Factory Racing Team Manager Antti Kallonen, “and our motivation is high with lots of fresh faces on our team roster this year.”

“I’m excited to bring a new rider — Johnny Girroir — to the World Trophy team” Kallonen continued, “as [Girroir] has been dominating in our national races here on a 250F. He is new to ISDE, but I have all the confidence he will perform well. With our seasoned veterans and former ISDE overall winners Taylor Robert’s and Ryan Sipes’ guidance, I have no doubt about it. I’m very excited to welcome back Layne Michael, who was part of our championship team in 2016. Since then, Layne has developed tremendously and I’m looking forward to a great performance from him as well.”

“I’m equally excited about our all-new Junior team this year,” Kallonen told the AMA. “Our former riders from the past have all aged out and we have some very fast, next-generation riders eager to step in, prove their speed and continue the title hunt in the Junior class.

“We have some new faces in the Women’s division as well,” said Kallonen. “Brandy Richards will be returning and gunning for the overall victory together with new team member Rachel Gutish, who is no stranger to ISDE and I’m happy to welcome her back. I’m excited to bring new rider Britney Gallegos to the team and work with her and the entire team to have a successful race.”

“I believe we have been able to form three strong teams to defend our World Trophy and Women titles and aim for a Junior title, as well,” he added.

Joining the 10 Trophy riders are 21 Club Team riders, who have qualified through the AMA East and West ISDE Qualifier series in the first six months of the season.

“We are thrilled to continue to grow the talent in the field of Club Team riders after taking the Club Cup win at the last ISDE in Portugal,” commented AMA Off-Road Racing Manager Erek Kudla. “We’ve got a great mix of seasoned veterans like Brian Storrie, who’s going to his 17th ISDE, and brand-new faces like 18-year-old Anthony Ferrante and 16-year-old Cade Henderson, going to their very first ISDE.”

The AMA’s ISDE effort would be impossible without the support of various companies. These include KTM, FMF, Trail Jester, Bonanza Plumbing. Arai Helmets, Motion Pro, Spectro Oils and Rabaconda.