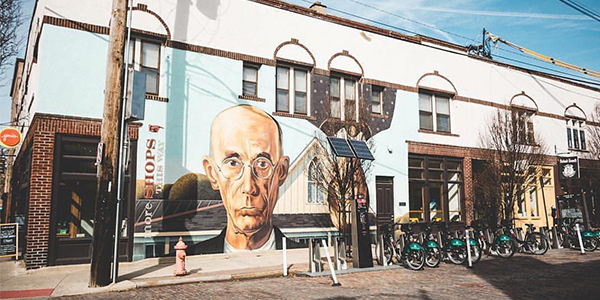 It’s just about go time in Columbus! It was a bold move by the folks at Motorcycle Industry Council (MIC) to move the AIMExpo to the Midwest, but judging by the number of exhibitors participating and excitement surrounding this year’s show, it’s going to be “YUGE,” believe me.

It’s just about go time in Columbus! It was a bold move by the folks at Motorcycle Industry Council (MIC) to move the AIMExpo to the Midwest, but judging by the number of exhibitors participating and excitement surrounding this year’s show, it’s going to be “YUGE,” believe me.

“The cool thing about Columbus is that everything is so convenient,” said Larry Little, vice president and general manager of AIMExpo/MIC Events in our Executive Interview last month. “It’s got different districts, and we’re in the convention district. But close to that is the Short North Arts District. Literally, if you walk 10 minutes from the convention center, you’ve hit all of the hotels and probably 50 restaurants and bars. You can go farther out if you want, but you really don’t need to.”

After four years in Orlando, the show continued to evolve, but the dealer turnout was not at a level the organizers were hoping for. Some of this was due to the location. So, with Columbus being centrally located to more than 40 percent of dealers in the U.S. who are within 500 miles, there should be no more excuses for dealers who stay home.

“Each year the show has improved and it’s encouraging that show leadership listens and makes corrections as the show evolves,” an exhibitor commented after last year’s event.

The Powersports DEALER Seminars recruits presenters from both the powersports industry and mainstream companies to educate dealers on everything from social media and marketing 101 to advanced dealership inventory procedures. Whether you’re an independent dealer with your family-run store or a multi-line dealer with multiple locations, this is FREE education that will help you make your business more profitable. The seminars feature four tracks with loads of information packed into the two-day schedule.

A record number of exhibiting OEMs will make their debut at the Greater Columbus Convention Center. In total, 24 OEMs have signed on to take advantage of AIMExpo’s multifaceted, all-in-one platform.

“The unprecedented response from vehicle manufacturers across the powersports spectrum is a recognition of the impact of AIMExpo for both trade business and consumer reach in just the event’s fifth year,” said Cinnamon Kernes, show director. “The move to Columbus puts the show floor in great proximity to the country’s retailers as well as a high concentration of the population of powersports users, and with the record number of OEMs, all attendees will have the opportunity to see an exceptionally diverse collection of new products. The range includes side-by-sides, motorcycles, innovative three-wheeled transportation, watercraft and snowmobiles, featuring both electric and gas power. Moreover, the extensive street demo-ride offerings at AIMExpo Outdoors! from a record nine different OEMs will give attendees the opportunity to experience the latest products for themselves.”

“We’re excited that we’ll have so many demo rides going on, and it looks like Kawasaki will be doing something fun at AIMExpo Outdoors!,” said Little. “It’s just the opportunity to put a butt in the seat. Because everyone knows that’s what gets people excited about the sport, and it’s what sells motorcycles. So that’s a critical component, and it’s critical as well for the trade days.”

With more than 500 exhibitors represented on the show floor there will be thousands of new products on display, many being unveiled for the first time in Columbus. This unparalleled access to the latest and greatest the powersports industry has to offer puts you a step ahead of your competition. In addition, many exhibitors will offer exclusive show specials for attending dealers to take advantage of.

There will also be plenty of industry peers to network with throughout AIMExpo. No matter whether you’re making connections among the exhibitors on the show floor or after one of the Powersports DEALER Seminars, or sharing a drink at the HAPPY! Happy Hour, there will be many opportunities to further your business network Sept. 21-24 at the Greater Columbus Convention Center.