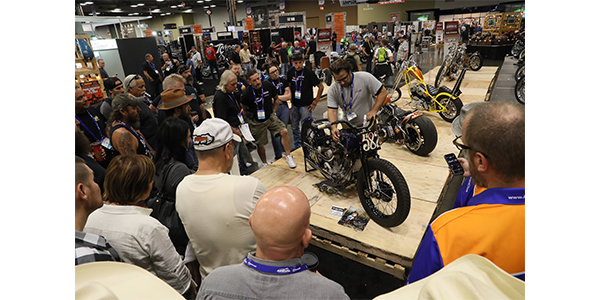 MotoCulture, a new lifestyle feature, embraces the essential elements of motorcycle culture and community, through a unique showcase that focuses on the machines, the people and the companies behind them.

The American International Motorcycle Expo presented by Nationwide introduces MotoCulture, a new lifestyle feature designed to embrace the essential elements of motorcycle culture and community, through a unique showcase that focuses on the machines, the people and the companies behind them. This all-new feature will debut as the show heads west this fall for the first time at the Mandalay Bay Convention Center in Las Vegas on October 11-14.

The new generation of riders are exposed to motorcycling in a variety of ways – on television, in music and on social media, as well as in the world of high fashion. Motorcycle culture also embraces craft and artisanal specialties like coffee, beer, spirits, leatherwork and more, which has led to a growing number of community-based dealerships and retail spaces integrating these cultural experiences.

MotoCulture will include major subcultures of the motorcycle community – street, adventure, off-road and urban – highlighting what makes each one of them unique while also focusing on the common threads that tie all enthusiasts together. Additionally, attending dealers will have the opportunity to discover new opportunities for enhancing their own business by learning more about how to adapt to the evolving motorcycle marketplace, and leveraging these popular new avenues to their own advantage.

“It’s easy to put the spotlight on the motorcycles since they are the driving force of the passion we all share as enthusiasts,” said Kevin Dunworth, MotoCulture ambassador. “However, with AIMExpo presented by Nationwide’s move to Las Vegas and the debut of Powersports Industry Week, we sought to introduce something that goes beyond the bikes and also focuses on the individuals and trends that make motorcycle culture and community what it is today.”

MotoCulture will bring people from all walks of the motorcycle community and beyond, creating a space that attendees will want to explore and spend time in. At “Espresso Lane” presented by Nationwide visitors will be able to get their caffeine fix with a specialty coffee bar, while the Race-Driven “Roadhouse” bar will offer adult libations with the support of the Michigan-based aftermarket supplier of ATV, UTV, motocross and street bike parts, accessories and apparel. Additional details surrounding MotoCulture will be announced leading up to AIMExpo presented by Nationwide’s debut in Las Vegas in October.

“With the addition of MotoCulture, AIMExpo presented by Nationwide is now bringing three critical elements of selling motorcycles into one all-encompassing experience,” said Cinnamon Kernes, AIMExpo show director. “The technical aspect of the show allows attendees to learn about all the newest products coming to the marketplace, while the experiential aspect allows the rubber to meet the road at AIMExpo Outdoors! MotoCulture brings the emotional aspect to the forefront as well, allowing consumers to connect with products in an immersive environment that highlights the life enthusiasts live through the freedom of being on two wheels.”