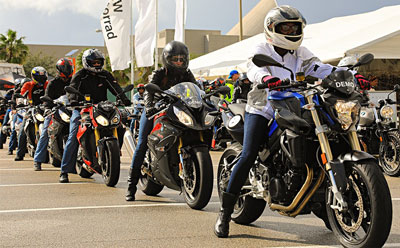 [dropcap]“T[/dropcap]he show must go on” is a show biz term meaning that regardless of whatever happens, whatever plans change the event still has to be staged for the waiting patrons… in the case of the 2016 AIMExpo that meant pulling out all the stops for the final event in Florida. This despite the fact that the Motorcycle Industry Council (MIC) had announced the industry event was leaving Orlando and headed to Columbus for 2017, not to mention that Matthew, the first Category 5 hurricane to hit the area since Hurricane Felix back in 2007, threatened to blow everyone away… all of this was in play before the bombshell was dropped about the show moving to Las Vegas in 2018!

“Onward and upward,” says Senior Vice President, MIC Events, Mike Webster. “Orlando has been a great partner for the first four years of the show, but it wasn’t a secret that we were leaving.” MIC carefully calculated the move to Columbus for 2017 in order to bring in greater numbers of dealers (see the “By The Numbers” sidebar). “If the dealers won’t come to the show, take the show to them!” says Webster. “With more than 40% of the nation’s dealerships within a 500-mile driving radius and a totally renovated convention center sized to accommodate the industry, Columbus makes sense.”

While the Columbus move was common knowledge by the time the show opened to dealers on Thursday, October 13th, what came next was a real surprise! “Vegas, baby!” exclaimed AIMExpo VP/GM Larry Little in announcing the move to Mandalay Bay Convention Center in Las Vegas from October 10-14, 2018.

“It’s been the goal to move AIMExpo around the country to make it more accessible to all of you,” Little said. “A bit of change is a good thing. Especially when you consider how this industry and its consumers have changed.”

What hasn’t changed is the need for dealer attendance at the show. After the welcome breakfast, Little wasted no time in explaining the logic of Las Vegas in 2018. “In addition to rotating the venue, we have wanted to co-locate the OEMs’ national dealer meetings in a rational way… the Vegas venue will make that possible.”  But before the industry makes too many plans for a show two years in the future, there was still plenty to see and do in Orlando.

HIGHLIGHTS FOR THE LAST HURRAH 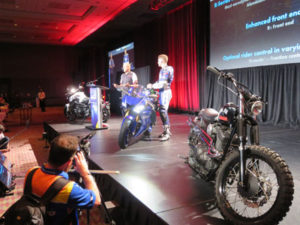 Moving into the North Hall was intended to make the outdoor demo rides much more accessible than in previous years. An expanded roster of dealer education opportunities kept many dealers busy thoughout the day, while in the evenings there was AMA Hall of Fame induction ceremonies as well as the MotoAmerica Night of Champions awards presentation. Throw in the custom bike competition, NPA /Harley Finance dealer auction and the Happy Happy Hour and there was plenty to see and do… not to mention the 450+ exhibitors from around the globe.

In fact, Yamaha chose the AIMExpo for the global launch of the refined, redesigned and remarkable R6. Sharing the stage with the most dominant sportbike in America was a sexy spin on the FZ-09 and a SCR950 Scrambler as Yamaha opened the AIMExpo in style with a preview presentation on Thursday morning. 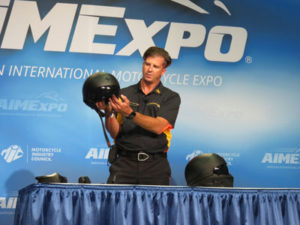 Suzuki showed off some sportbikes, KTM presented its 2017 ADV array, KYMCO created a stir with a couple of 2018 scooters, and SSR busted out both the new Benellis and its Buccaneer 250cc air-cooled V-Twins in Classic, Cafe’ and Scrambler variants.

It wasn’t just hot new bikes and cool aftermarket accessories at AIMExpo. Dealers may have wondered why the old Wells Fargo stagecoach was on display during the industry party. Jeremy Jansen, the powersports commercial leader for Wells Fargo Commercial Distribution Finance (CDF) was on hand to roll out CDFconnect. “CDFconnect combines 60 years of industry and inventory financing experience with the business’ relationships to deliver insights, training and technology to help OEMs, distributors and dealers make better decisions,” says Jansen. For the record, CDF provided $47 billion in financing for more than 45,000 dealers around the world (5,000 in the U.S.), and 2,000 distributors and manufacturers globally in 2015.

Despite Hurricane Matthew roaring in like a lion and disrupting dealer and consumer attendance, the show did go on for AIMExpo 2016… now on to Columbus and then get ready for Las Vegas in 2018! 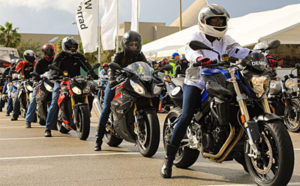 [dropcap]T[/dropcap]he good news was that despite Hurricane Matthew blowing through just days before the show, there were a record number of consumers in attendance. More than 12,000 attendees were undeterred by the storm, according to AIMExpo management. Unfortunately, the exhibitor badges outnumbered the dealer badges 3,029 to 2,459 on the show floor during the trade-only days.

Even with the weather-related challenges, trade day attendees representing 1,116 dealerships from 49 states and Puerto Rico were at AIMExpo 2016, according to the traffic through the turnstiles (actually electronic registrations).

There were also folks from 44 counties, the expanded Italian Trade Agency Pavilion, OEM displays from Aprilia and  Benelli to KTM, KYMCO and Vespa did make for an International ambiance.

While Central Florida was fortunate enough to avoid direct impact from the most damaging storm to hit the U.S. since Hurricane Sandy, many registered exhibitors, dealers, media, and international visitors were adversely affected by Matthew and were unable to attend. Some exhibitors found some of their show goods delayed, re-routed to Jascksonville or worse in the aftermath of Matthew. Bikers who had been planning to hit Biketoberfest in Daytona Beach canceled their trips, putting a damper on the V-Twin sector.

The good news is that weather should not be a factor when the show shifts to Columbus next September. The better news is that dealer attendance should also see a surge for AIMExpo 2017.