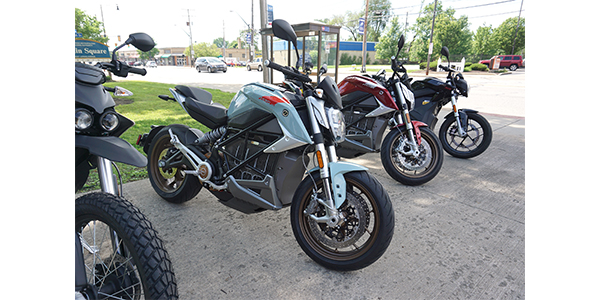 Electric is all the rage right now; from Harley-Davidson’s LiveWire to the Energica Ego, the future of gasless motorcycles is coming to fruition.

Electric is all the rage right now; from Harley-Davidson’s LiveWire to the Energica Ego, the future of gasless motorcycles is coming to fruition.

Having never rode an electric vehicle, I thought it was just because I was living too deep in the Midwest where those types of technologies didn’t make their reach past California. In fact, I can only identify one electric charging station in a 20-mile radius from where I live.

Regardless, electric motorcycles are here and they’re only going to increase in popularity over the next decade. But what makes these vehicles so popular?

Of course, it is, first and foremost, the benefit to the ecosystem that electric vehicles offer. In close second is very minimal maintenance. There is a list of things riders will never have to do again after they switch to electric, including never buying gas, changing oil, changing air filters, replacing spark plugs or having to worry about fuel stabilizer during winter storage. But that all sounds too good to be true.

I stopped by a popular dealership in Cleveland, OH, simply named Cleveland Moto, to test one out. The dealership is an authorized Kymco, Genuine, Vespa, Piaggio and Zero Motorcycle dealer.

Zero Motorcycles’ Northeast Regional Sales Director Scott Greenwood introduced me to the 2019 SR/F. At first glance, it looked like a sleek and sporty street bike with a large fuel tank that was actually a compact storage compartment. On the exterior of the “tank” was the Rapid Charge System that allows the bike to be configured for 3 kW, 6 kW, 9 kW or 12 kW of charging at any standard Level 2 charge station.

Below the storage compartment was the ZF14.4 lithium-ion battery, housed in an aluminum heat-sink with a thermal transfer interface that ensures consistent cell cooling and maximum long-term powertrain performance. The battery itself takes 80 minutes for a full charge on the standard model and 60 minutes to charge on the premium model.

Onboard, the bike is equipped with the Zero’s Cypher III operating system and Bosch’s Motorcycle Stability Control, which deliver effortless power and intuitive control to navigate diverse road terrain.

On the dash was a full-color 5-in. TFT LCD display that is entirely customizable, where you choose the bike information you want to see, including multi-mode navigation that enables on-the-fly ride mode switching, cruise-control and heated-grip control. The motorcycle also communicates through an app that tracks  charge, ride information, current bike status and location.

On the handlebars, there was no clutch lever, only the throttle and a brake lever on the right side.

That’s right, no shifting necessary. When I noticed this, I became very skeptical. I imagined the ride would be similar to a scooter, with any gas-powered machine leaving you in the dust at a green light, only hoping to eventually reach a decent speed. Greenwood noticed my skepticism and was bound to prove me wrong.

I turned on the ignition and questioned whether or not it was ready to go because there was virtually no sound. Greenwood assured me it was and showed me how easy it was to switch between ride modes with a simple thumb tap on the handlebars, all without moving my hands from the driving position. With a twist of the throttle, I was on the road.

It was rather strange that there was no clutch and I continually reached for it but had to remind myself that I didn’t need it. The throttle itself was extremely responsive, along with the bike; no sudden movements or anything unexpected. Twist the throttle and go. Hit the brakes and stop.

The bike was set to “eco” mode to start, which is the most user friendly. After a few minutes in the seat, I tapped my thumb at a stop sign to switch over to “sport” mode, eager to feel the results. At this point, I was off of the main city streets and was able to test the bike’s true speed, and it did not disappoint. Not once did I feel left in the dust by my fellow gas-powered motorcyclists. The bike responded to my throttle movement and accelerated as quickly or as slowly as I wanted. When I let off of the throttle, the bike responded like a loyal puppy.

Even with a massive battery scaling the machine in at 485 lbs., it felt light and nimble and at no point did I feel excessive heat from the battery. Greenwood mentioned that the SR/F was tested in Death Valley at 120° F, which did not cause the bike to overheat or have any issues.

Standing at 5 ft., 5 in., it can be difficult to find a bike where I can sit comfortably on the seat without having to really reach to get my toes to hit the ground. On the SR/F, my feet rested flat on the ground. The SR/F’s seat height sits at 31-in. with an accessory option at 30.3-in. and 31.9-in.

The SR/F has a lot to offer to both a new rider who is uncomfortable with a clutch and an expert rider who wants a fun commuter bike. If riding electric is the future of motorcycling, and the future is available now, take advantage of the opportunity.