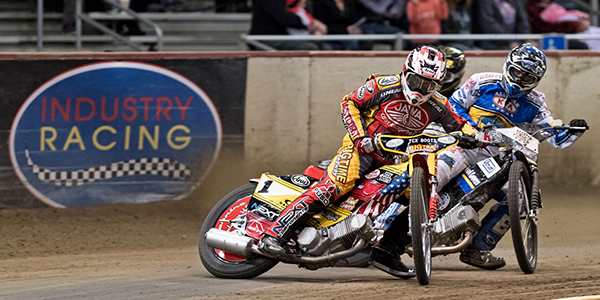 Industry Racing’s Speedway at the Grand will host an exciting season opener at the Industry Hills Expo Center in City of Industry, CA. Located in Americas premier covered speedway venue, on Wednesday, May 29, the fifth Annual Connor Penhall Memorial Cup will take place.

Speedway, widely known as the first form of organized motorcycle racing, utilizes a specific built, fuel burning, 500cc machine with absolutely no brakes. Sixteen top veteran, and young gladiators take to the track in twenty-three, edge of your seat, insane races, all battling for the top spot, and their share of the more than $13,000 purse, and one of American speedways most coveted trophies, the custom painted Troy Lee Designs Helmet.

The fearless racers include No. 1 in the U.S, reigning and 4x CPMC champion, Billy Janniro, the amazing Ruml brothers and Austin Novratil, fresh back from International competition. Jr Speedway will also be featured on the night with the future stars of American speedway. A special ceremony will kick off the event, featuring Grand Marshal Jeff Ward, former supercross and motocross champion, and one of the top Indy car, super moto and flat track racers in the world.

The Connor Penhall Memorial Cup pays tribute to Connor Penhall, an avid racer and son of two-time World Speedway Champion and AMA Hall of Fame Member Bruce Penhall, whose life was tragically taken by a drunk driver while working construction on the local freeway just up the road from the Expo Center. The Memorial Cup was established in 2015 to celebrate Connor’s enthusiastic spirit and natural talent on a motorcycle that made him beloved by the entire racing community. Since his passing, the Penhall family has fought valiantly in Connor’s memory to increase safety provided to highway construction workers and bring awareness to the dangers and tragedies caused by drinking and driving.

Attendees can experience the high-paced, fast-tracked thrill of Speedway racing on Wednesday nights from May 29 through Aug. 24. In addition to watching the racing, guests can enjoy a fresh variety of food, vendors and family entertainment.