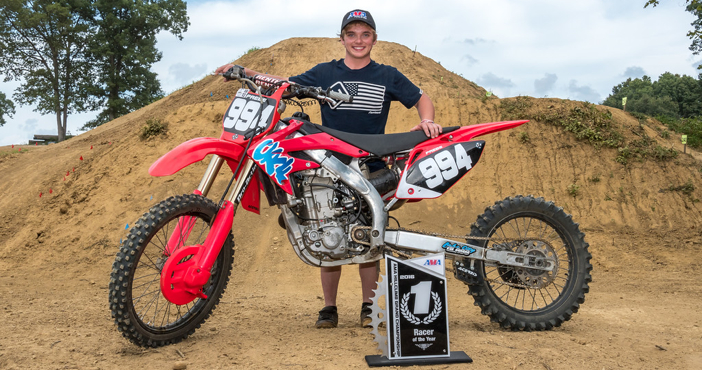 More than 300 amateur hillclimb entrants lined up at the 2016 AMA Hillclimb Grand Championship, hosted by the Pleasure Riders Motorcycle Club the weekend of July 29-31 at the Thunder Ridge facility in Neoga, Ill.

Prebe won the 250cc, 450cc and Four-Stroke national championships. He also captured the King of the Hill Award — a one-run competition among the 10 fastest riders of the weekend at the end of the program on Sunday.

“Hillclimb racers from all corners made their way to Illinois to prove that they were the fastest and most tenacious racer in their class,” said AMA Track Racing Manager Ken Saillant. “Nathan dominated the competition this year, and the AMA congratulates him on earning the highly sought-after AMA Hillclimb Racer of the Year Award.”

Lane Brookshaw, 8, of Ellsworth, Wis., secured the 2016 AMA Youth Hillclimb Racer of the Year Award thanks to his performance over the weekend. He took home AMA National Championships in the Micro Mini and 65cc classes.

“It means a lot to me,” said Brookshaw who’s been racing for four years. “It was a surprise.”

He hopes to continue working on his points for AMA Districts 16 and 23.

Jackson said he has been building engines for hillclimb competition for several years and doing suspension work, but just started racing himself in 2012.

“I guess when I was a kid and won amateur titles at Loretta’s in motocross [at the AMA Amateur National Motocross Championship], I didn’t think I’d win another title at 44,” Jackson said. “It’s neat to be able to win one at this age, and you probably appreciate it a little bit more. I’m looking forward to doing more hillclimbs.”