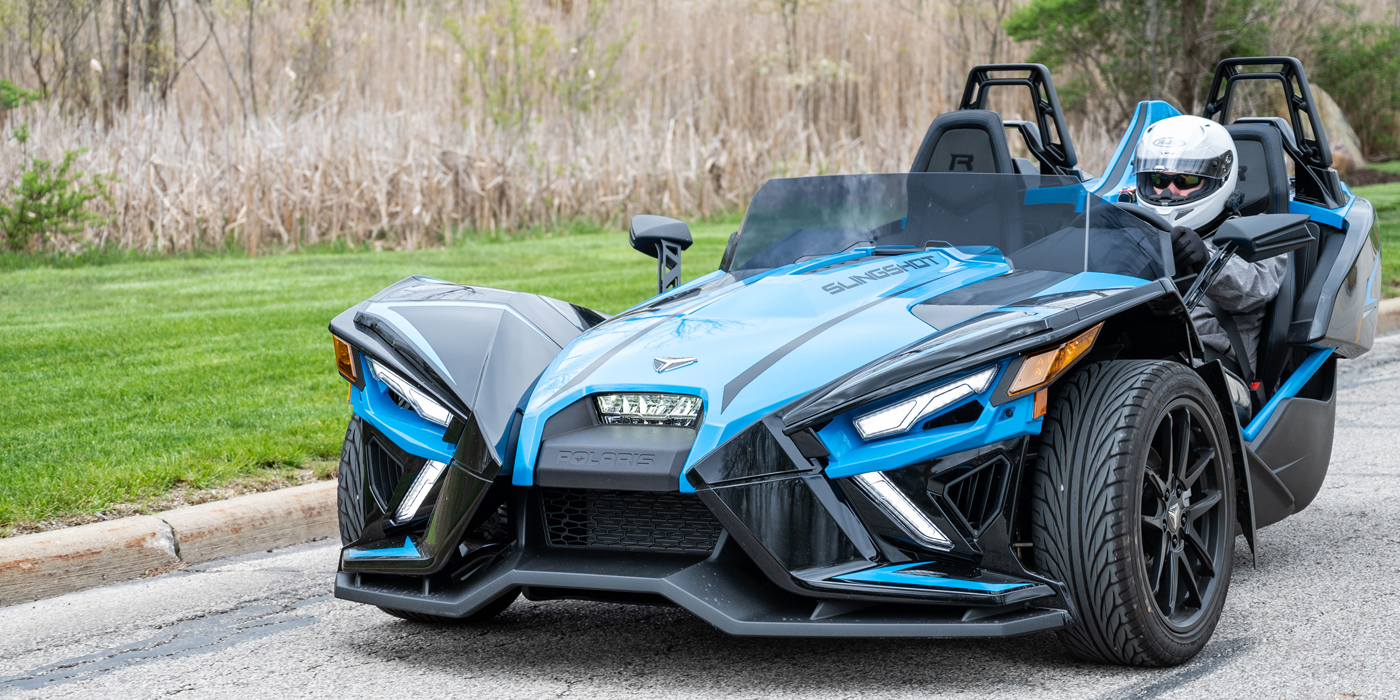 The great thing about a Slingshot is that it feels natural to drive. It handles much like a car, and the single rear Kenda 305/30R20 is big enough to hold the grip in most corners along with the revised twin-tube gas-charged coil-overs and upgraded swingarm.

Is it a car or a motorcycle? The questions about what a Slingshot is have gone on since its introduction in 2015. The fact that a powersports manufacturer builds it probably makes it easier to slot into the motorcycle category, but then there’s the Morgan 3-wheeler, which has been around since the early 1900s.

Seeing a Morgan 3-wheeler in England was not that strange, since they had been around since the first automobiles. There were 1,000 hand-built “autocycles” by the end of WWI, and there wasn’t an NHTSA around to regulate them as something else.

The Slingshot is a far different story, but Polaris found a loophole, and they’ve slowly been making progress with their concept. BRP/Can-Am has been a three-wheel believer for years, selling more than 100,000 Spyders and introducing a lower-priced version in 2018, the Ryker, for new riders.

No time to read? Watch the review instead: click here!

Three wheels have been a big part of the powersports industry, even if it has been somewhat controversial. As a middle-schooler, I regularly flogged my friend’s Honda ATC 110. That was my first time on a three-wheeler, and while I never flipped over, it was not at all safe for a 13-year-old! We knew it wanted to throw us off, but we kept riding it anyway until we got the hang of it.

The great thing about a Slingshot is that it feels natural to drive. It handles much like a car, and the single rear Kenda 305/30R20 is big enough to hold the grip in most corners along with the revised twin-tube gas-charged coil-overs and upgraded swingarm. Under assault from an aggressive right foot, it will “slingshot” from any stoplight with just enough wheel spin to put a grin on your 16-year-old inner self, but then the traction control kicks in. Turning off the traction control gives a little more wheel spin, but the auto-drive steps in to grab another gear. You may wish at that point for a manual transmission to hold the burnout longer, but your rear tire will thank you later for saving some tread for the corners.

Pressing the start button for the new keyless ignition sounds like firing up a race engine. The best part of the Slingshot R, in our opinion, is the new ProStar 2.0L engine. It is more race car than a quiet street engine with its tuned, throaty exhaust. And it is head and shoulders above the previous engine, the Chevy Ecotec 2.4L, that was more like a kitten than a lion.

The new 4-cylinder is a first for ProStar, which makes Polaris’ off-road RZR engines. The 2.0L is loosely-based on the ProStar 1000 twin-cylinder. Polaris said the engine was purpose-built specifically for Slingshot, with all of the main components designed deliver a unique driving experience. We think there’s a ton of potential with this engine, which already produces 203 hp at 8,250 rpm and redlines at 8,500! We know of people who have swapped Honda V-Tec engines into the previous model Slingshots. Now you won’t have to in the R-trim, anyway. The base model is not that bad either with 178 peak hp.

Climbing into the cockpit is relatively simple and easy to slide down into the seat. Getting out, on the other hand, is a bit awkward, even for a vertically challenged individual. A tilt wheel or a removable steering wheel would be a nice add-on.

The ergonomics of the dash, radio/GPS infotainment system are well laid out. The feeling from the driver’s seat is similar to what I felt in my Sports Racer that I used to race in SCCA and IMSA, except it was a right-hand drive. There is also a drink holder, but it is of little use with a full-face helmet. Maybe a straw would help.

The push-button transmission controls aren’t as cheesy as it sounds. It leaves more room in the cockpit, and since it’s electronically controlled, it doesn’t matter. However, I like the feel of a shifter. Maybe that’s old school, but it just seems more intuitive.

When our managing editor drove it, she mentioned the clunking sound in first gear. To me, it feels more like a racing gearbox that has straight cut gears with a little clunk as it slides into gear. The button has a positive feel when you engage it, as if you intended to do it. But I can also see the other side of it and the sound may disturb some riders.

In other reviews we read about the Slingshot R, the auto-drive raised plenty of questions, but we think it works well with the high-revving engine and will open new segments for the brand that it has been lacking. While the transmission takes some time to get used to, once you acclimate, it feels sporty enough. It depends on how hard you drive it and how you position the throttle at corner entry.

As a racer, I do all my shifting before the entrance of the corner before going back to the throttle. I got carried away a few times on the throttle and confused the transmission into shifting down when I wanted it to shift up.

The two pre-set engine map modes allow you to somewhat control the shifting patterns via a red button on the steering wheel. The “Slingshot” mode pulled all the way to redline and seemed to shift more abruptly than “Comfort” mode. I used the red button more like a “launch” button for take-off and sometimes in hard cornering.

Most people will say a paddle shifter would be an improvement, and I would agree. I understand some of the reasoning behind not adding it at first. I’d choose a paddle-shift rather than a manual or full-automatic. But some people who cruise along the beach may think otherwise. We know that there’s probably more to come with the auto-drive, and we’re also glad that Polaris didn’t try to use a CVT.

I will say that I’m not a fan of the aggressive, Batmobile styling. However, my nieces and nephews loved how it looked. And my mother-in-law and her neighbors, who live in a retirement community, also loved it. It seems like there’s no in-between. You love it, or you don’t. I may be one of the few in-between, but I would prefer a less aggressive look. I want to tone it down, give it more classic lines. I grew up with British sports cars, and that classic look, like the Morgan 3-wheeler, sing to me. But the price tag on a Morgan is about three times more than the Slingshot.

The good news for Slingshot dealers is this new whip has been selling pretty well, even with all of the craziness of COVID-19. With a new engine and other tweaks along with auto-drive, there are about 203 powerful reasons your customers will like the Slingshot R.