Epicenter of the UTV Industry

Given Southern California’s reputation for earthquakes, it is appropriate that the Sand Sports Super Show has come to serve as the epicenter for the UTV industry. The 16th annual event was held September 19-20 and marked the unofficial kick-off for the sand dune season. From an exhibit of historical sand rails from the 1950s and ’60s up through the latest 2015 machines from the OEMs, this show has grown from a small swap meet-style gathering for local duners to becoming the de facto UTV industry trade show. Billed as “the biggest and most exciting dune and dirt expo in the world,” there were several hundred aftermarket exhibitors and dealerships with huge displays filling the historic Orange County Fair facility and spilling out onto the former runway of a WWII airbase. 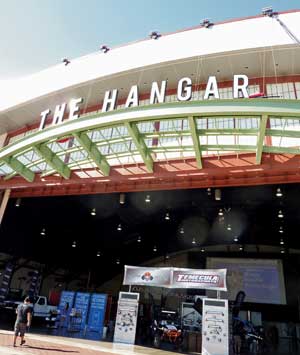 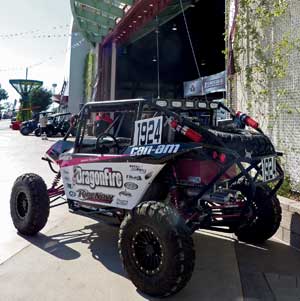 Can-Am certainly shook things up, showing off the new 121-horsepower Maverick X ds! This turbocharged monster captured the attention of the SoCal sand duners and the industry as a whole. Like last year, the Canadian OEM pulled out all the stops for the “Can-Am Experience” exhibit area, highlighting its full range of side-by-sides. Even former MPN cover model, the hot pink Can-Am Maverick piloted by 2x Mint 400 Sportsman winner Lacrecia Buerrier, was on hand. Not to be outdone, Kawasaki had its big rig on hand showcasing the Teryx, supported by a fleet of customized, sand-oriented machines and some Team Green UTV race cars.

Star power was not limited to the vehicles as Pro Armor announced its “Pro Bilt” custom shop that does everything from minor cosmetics/bolt-ons to full-blown, race-ready machines like the RZR it built for the king of Supercross, Jeremy McGrath. Speaking of motorcycle guys, X-Games Freestyle MX gold medalist Ronnie Renner showed up to sign autographs and show off his new SDR-built Red Bull Polaris RZR. Have you been keeping up with the Kardashians? Olympic gold medalist turned Kardashian sideshow, Bruce Jenner was also on hand… he bought a couple of UTVs from mega dealer Bert’s Mega Mall with the intention of racing them.

Jenner was treated to some hot laps on the adjoining Stadium Super Truck course with Robby Gordon. Before you think you can keep up with Jenner, remember he raced a Kawasaki in the very first Super Bikers competition and later had some success in car racing in the IMSA Camel GT series in the 1980s. He won the 1986 12 hours of Sebring in the IMSA GTO class with co-driver Scott Pruett, and finished second in the championship to Pruett that year. “I was a lot more of a badass runner than I was a driver,” jokes Jenner, but he seems pretty serious about a Pro UTV career these days.

On a more serious note, the show promoters and a number of key vendors supported the public land access and advocacy group, American Sand Association, raffling off a full tilt Patton Pre-Runners sand rail and an Arctic Cat Wildcat. ASA is upping the ante for 2015 as Polaris, the RideNow family of dealerships and DragonFire teamed up to unveil the trick RZR XP4 1000 that will be the prize for next year’s raffle.

If you are a dealer, aftermarket outfit or OEM specializing in the UTV market, it is not too early to start thinking about the 17th Annual SSSS set for September 18-20, 2015. It should be rocking and rolling as it builds on the success of this year’s show. Visit www.sandsportssupershow.com for exhibitor details.