When somebody asks you what you do for a living, do you automatically answer that you are in the motorcycle business? We all tend to identify powersports dealers as “motorcycle” dealers… however there are a growing number of alternative profit centers. 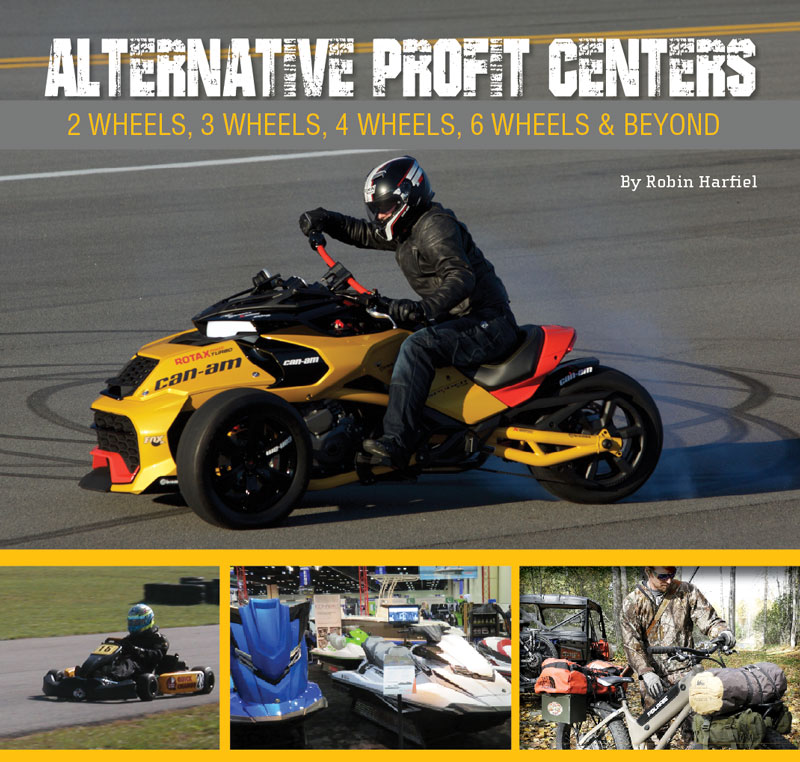 [dropcap]W[/dropcap]hen somebody asks you what you do for a living, do you automatically answer that you are in the motorcycle business? We all tend to identify powersports dealers as “motorcycle” dealers… however there are a growing number of alternative profit centers. From the futuristic Biski and eBikes to Slingshots and Spyders to the Banana Splits six-wheeled ARGO buggy, there are a lot more than motorcycles on showroom floors these days!

Excluding the snowmobile, which is a market unto itself, motorcycle dealers evolved from Indian and Harley-Davidson at the turn of the century and stayed the course for the next 50 years. Although not a conventional motorcycle per se, the Servicar and other early three-wheeled delivery vehicles, and the 1958 release of the Rokon, did little to change the perception of what a “motorcycle” was. However, with the advent of the Honda ATC90 in 1970; the mass marketing of Kawasaki’s Jet Ski in 1973; Suzuki’s creation of the “quad” market with the LT-125 in 1983; Kawasaki’s 1988 release of the Mule to introduce the SxS concept further defined as UTVs by Yamaha’s Rhino intro in 2004 and Arctic Cat’s Prowler in 2006, and revised to a “sport UTV” by the Polaris RZR in 2007; the industry has certainly expanded.

To accommodate this alphabet soup of ATC/ATV/PWC/UTV terminology, the industry has shifted from “motorcycle” to “powersports.” From 1903-1983 we were the motorcycle industry; with product innovation and all these emerging niches, we evolved into the powersports industry… and there is no end in sight! With everything from the full family of amphibians from Gibbs (see sidebar), to Polaris pushing the envelope with the Slingshot and simultaneously entering the eBike business, there are plenty of alternative profit centers to tap
into in today’s market. Profit being the operative term.

“The Side-by-Side market is evolving, and that’s a good thing for dealers who will have more selling options,” says Steve Nessl, Yamaha ATV/SxS group marketing manager. Nessl should know… after having been an editor for Dealernews magazine, his first project for Yamaha was the original Rhino launch. “Just as the Rhino proved to be a game changer, the new YXZ is set on a similar trajectory. As the only pure sport SxS, the YXZ1000R is not only redefining what ‘sport’ means for SxS vehicles, but also leading the way into new SxS segments never before imagined,” he claims.

Among the never before imagined segments is the emergence of alternative power sources such as the hybrid and electric UTVs from Bad Boy/Textron UTVs profiled in the last issue. “For off-road and recreational vehicles specifically, the benefits of electric propulsion is emission-free transportation and lack of noise,” says John Collins, vp consumer, Textron Specialized Vehicles. “Additionally, the torque, hill climbing and “fun factor” capabilities of electric vehicles are impressive.” Collins concedes that EVs only account for 6% of SxS sales in North America today… but tomorrow is another story! 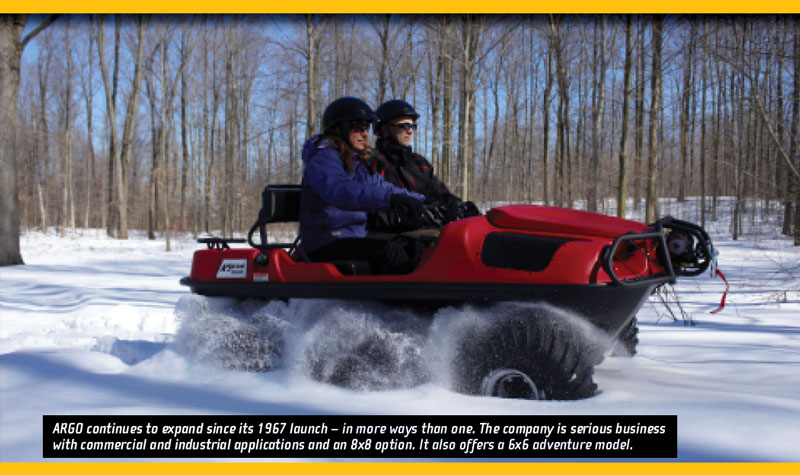 Polaris has been ready to charge ahead into the eBusiness with its EVantage high performance electric bicycles. From ATVs and snowmobiles, to motorcycles and military vehicles, Polaris Industries has been at the forefront of recreational vehicle production, and as they recently demonstrated with the Slingshot, they embrace alternative market niches. In 2011, Polaris introduced eBike 1.0 and signed up more than 100 dealers throughout the U.S., Canada and Latin America in the first 12 months alone.

Polaris shifted the EV program into high gear in 2015 with the launch of eBike version 2.0 featuring three new proprietary technologies in bicycle gearing, battery regeneration and auto terrain sensing controls. Polaris now has a full range of eBikes spanning eight different models, priced from around $2,500 through $5,000, with solid dealer margins.

As electrifying as some of this new technology may be, even venerable Rokon 2WD vehicles roll on. Almost as old as the Rokon, the amphibious skid steer ARGO continues to expand since its 1967 launch – in more ways than one! Although old timers will think of Saturday morning cartoons and the Banana Splits bouncing around in their six-wheeled buggies, the company is serious business with commercial and industrial applications, and an 8×8 option! Look for the full story of this Canadian success story coming soon in MPN.

Whether it has two, four, six or eight wheels; is amphibious, submersible or hovers; gas, electric or hybrid dealers have never had more alternative profit centers to choose from. Does it still seem far-fetched to think of selling anything other than traditional two-wheelers in your “motorcycle” dealership? Consider the fact that nobody had ever heard of a Can-Am Spyder, but in less than seven years more than 100,000 of them have rolled off dealers’ showroom floors. It might be time to rethink the strict “motorcycle” mentality?

[dropcap] T[/dropcap]he amphibian market has been around as long as there has been powersports vehicles. The Amphicat, the Amphicar and dozens of land/sea machines seemed to be destined to remain sidebars to the history of powersports. However, entrepreneur/inventor Alan Gibbs believes this is all about to change. He envisions a worldwide market for such vehicles within the next five years! MPN gets the scoop straight from Gibbs as part of the launch of the Biski amphibious motorcycle and the Terraquad – a water-going UTV. 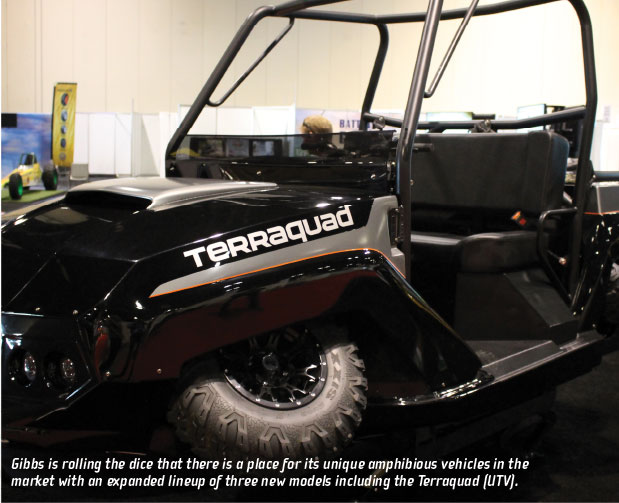 There is absolutely a market for amphibians declares Gibbs. “A certain amount of customer behaviors need to change, much like smart phones changed the way society thinks and works. Nobody knew they needed a smart phone until the inventors changed the consumers’ ways of thinking. Nobody knows they need a high speed amphibian… until they use one. For many people, the High Speed Amphibians concept was a novelty or a movie gadget. Through our efforts, we have been able to show and deliver a totally different way to think about transportation across the planet by eliminating boundaries… and we are
not stopping there!”

So who is buying the Quadski now? “We have a large and diverse portfolio of owners across the globe,” claims Gibbs. From yacht owners using them as tenders to local authorities using them for patrol and SAR (Search & Rescue), the proof of concept is taking hold. “SAR is an area where we are seeing tremendous results, primarily due to the rapid deployment capability of our machines,” he explains. “No trucks or trailers are needed, and neither are PWCs. The Quadski’s seamless transition between land and water reduces valuable lifesaving time in reaching and transporting victims, as well as, eliminating effort and equipment for the rescuer. To me, this is what my high speed amphibians should be all about.”

Given the positive results, why haven’t other OEMs entered the amphibian market yet? “It’s a small market with minimal current demand – just like a smart phone would have been in 2002. It’s ahead of its time and OEs with large dealer networks need products for the masses,” says Gibbs. “The Quadski is currently a niche product, but is perfectly positioned to explode into larger markets.” Customer perception is also an issue. “The customer doesn’t get it yet. Most everyone thinks of amphibians as compromise vehicles – slow and useless. The Quadski and its high-speed sister products will grow massively once the world truly understands their convenience, fast deployment, fun and land/sea capabilities. Now that we have started to make an impact and customers are seeing and using these products, I believe we will start seeing the OEMs sit up and take serious note of what can be done in our industry. After all, the Earth is still 3/4 covered in water!” 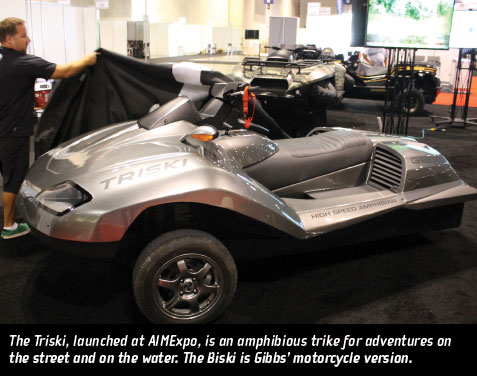 With this in mind, the AIMExpo gave dealers their first look at the evolution of the Quadski. Gibbs introduced Search and Rescue/Patrol models, along with an entry into the UTV market, the Terraquad. “This is our version of a Side-by-Side vehicle, but with the same amphibious performance of the Quadski.”

However, Gibbs is most enthused about the two new alternatives. “Our next two high-speed amphibious products are really exciting since our customers have been clamoring for on-road vehicles – something they can drive to work while taking a little adventurous ‘short cut’ along the way.”

Thus the Triski, Gibbs’ version of a Trike. “This vehicle will provide stability and power for those that want fun on the road and in the water. Finally, one of my favorites is the Biski. It is the world’s first high-speed amphibious motorcycle. Imagine the excitement of taking your motorcycle skills and thrills, then translating them to the water. With the Biski, you can have it all!”